Beer market specialists Plato Logic are currently projecting low growth for the World Beer Market in 2019. After 2015 and 2016 saw the first annual declines in world beer consumption for over 30 years, there was a modest recovery in both 2017 and 2018, with Plato Logic’s latest outlook being for a further +1.1% growth in 2019.

Commenting on the latest projections Ian Pressnell, Director of Plato Logic noted: “It appears that the world beer market is entering a phase where the ‘new normal’ is for very low growth. With emerging market growth slowing and competition from a range of sources, innovations such as ‘craft’ and ‘nablab’ can only compensate so far. This means that looking ahead we are projecting sub-2% annual growth as the ‘new normal’, rather than holding out the prospect of a return to the long-term +2-3% that had been the industry’s benchmark over the last 30 years.”

The following table summarises Plato Logic’s projected volume growth by region for the World beer market in 2019 and 2020:

Mexico is poised to overtake Germany to become the fourth largest beer market by volume in 2019. 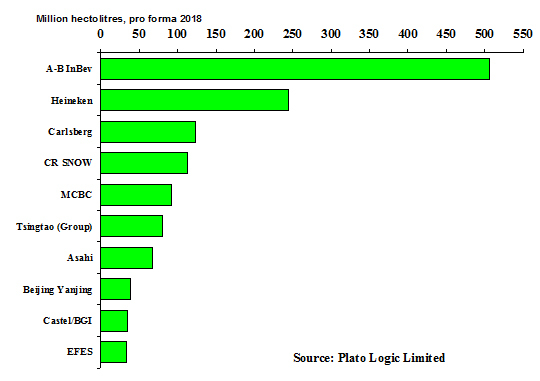 Notes to chart: volumes adjusted for merger of A-B InBev and Efes interests in Russia/Ukraine. All adjustments relating to SABMiller transaction reflected full year. Heineken and Kirin figures adjusted for transfer of Brasil Kirin business. [Some deals may be pending regulatory approval.]

Plato Logic’s latest annual “World Beer Report” was published 7th October and contains 2019 projections for all world beer markets. Published every year since 1994, the Plato Logic “World Beer Report” is a standard source of reference used throughout the international brewing and allied industries.