According to latest figures released by beer market specialists Plato Logic, the World Beer Market grew by +1.4% in 2018. Ian Pressnell, Director of Plato Logic, commented: “The world’s 6 biggest beer markets, accounting for over 55% of global beer consumption, grew by a combined +0.8% in 2018 as China returned to growth for the first time since 2013.”

Recent weakness in China has held back the world headline figure, with a 5-year CAGR of just +0.25% for the period 2013-18. Excluding China, all other markets recorded a 5-year CAGR of +0.91% over the same period. Assuming a more stable outlook for China continues, Plato Logic currently project that the World Beer Market will grow by +1.8% in 2019. 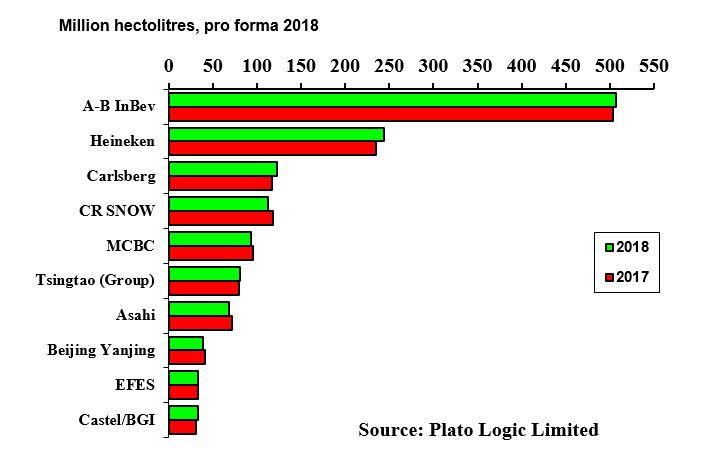 Notes to chart: 2018 volumes adjusted for merger of A-B InBev and Efes interests in Russia/Ukraine. All adjustments relating to SABMiller transaction reflected full year. Heineken and Kirin figures adjusted for transfer of Brasil Kirin business. Some deals may be pending regulatory approval.

Plato Logic have also provided a new league table of the top beer brands, based industry value. This is a calculation of the actual net invoiced ex-brewery value; it is not a ‘brand valuation’ exercise based on a computed financial or balance sheet ‘worth’ of that brand, nor is it based retail sales.

Only 2 Chinese brands are in the value top 12, with the world’s biggest beer brand by volume Snow dropping to 5th place. Heineken rises 4 places to number 2 based value; Asahi Super Dry and Tuborg enter the table, with Michelob (range) a new entry for 2018 at number 10. In total, 23 brands achieved over $US1bn (i.e., net ex-brewery) in 2018. 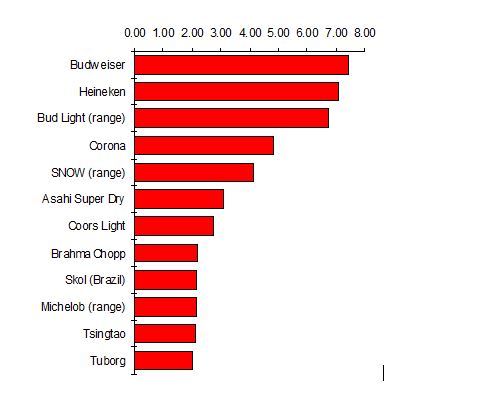 Note: all 2018 figures provisional and subject to exchange rate variances.